You are here: Home / Trip Reports 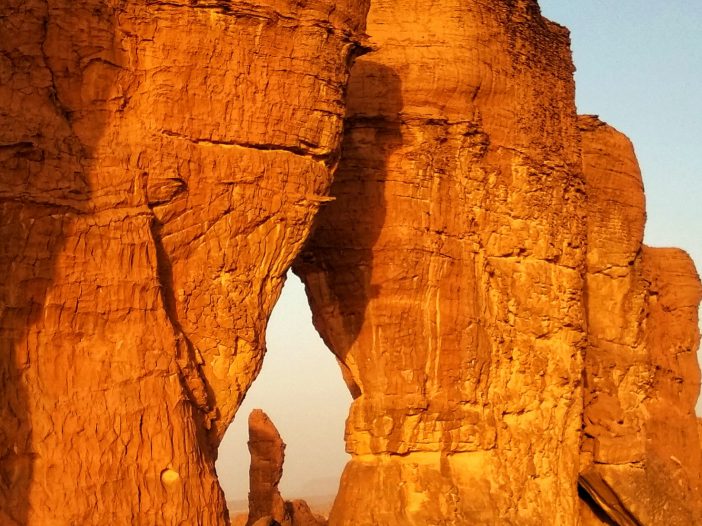 Back when the world was a normal place, Moumita Bagchi travelled with us to a place unlike most — the Northern African country of Chad. An excerpt of her blog post is given below. The full post can be read here: https://mytravelaroundtheworldandmore.wordpress.com/2021/05/02/abbaike-of-ennedi/

“You know this place deserves a romance”, said S., our group leader, as we relaxed after taking an open- air lunch at the magnificent setting. We were at Abbaike in the Ennedi plateau of Chad, where huge rock formations were arranged in a natural amphitheatre. In fact it had a striking similarity to an open roofed cathedral. Over lunch we had confessed to a weakness for Regency Romances, romances set in early nineteenth century England. Now we became determined to write a Regency style romance, (much to the consternation and secret amusement of the lone male in a group of five; the poor man was quite overwhelmed by four strong_ willed women.) only the intrepid heroine would come here and meet her hero. The details could of course be fleshed out later. True to the setting, we decided to call her Abbaike of Ennedi. As to what she was doing here could be worked out later. Maybe she just had an incurable wanderlust like us.

A little over a year ago, in February 2020 a group of us had travelled to Chad to have a grand adventure. At that time we were hearing stories about a mysterious virus ravaging China, but of course China was a long way off from this Central African country and a virus attacking people in China would not affect us here, or so we thought. While we were at Chad Italy had already started reeling under the onslaught of the Covid 19 virus. By the time we came back from Chad, the world as we knew it irrevocably changed. I am not sure whether it will be possible to have such a care-free adventure again in the immediate future. The last year has also been a momentous one for Chad. Violence had erupted at the Lake Chad area, always an unstable place. The President Idriss Deby Itno lost his life in a coup in April 2021, and Chad has now become unstable, just like it’s neighbours Mali and Niger. So this is a tribute to a wonderful country, it’s lovely people and a happier time.

Our journey started in N’Djamena, the capital of Chad, where we had assembled after flying in from our respective countries. Long before the European advent into Chad, this place at the confluence of the Chari and Logone river was important as a prominent riverine trading center. The French realised its importance and developed it into a city and named it Fort Lamy. After independence the Chad government adopted the present name.

N’Djamena is also the place where you can visit Toumai or ‘Chad Man’. Chad National Museum hosts the restored partial skull of ‘Chad man’   ( Sahelanthropus Chadensis ), thought to be the earliest hominid discovered till date. Toumai was discovered in the Ennedi plateau and roamed this portion of the world about 7 million years ago. Of course Ennedi was a very different place then, with some experts believing that it had a Savannah type habitat at that time, a time of a greener Sahara in places.

At present Chad is a place which is sadly in economic recession, in spite of it being an oil producing country. Fewer tourist footfalls are happening. One of the largest hotels in N’Djamena, the Hilton, has unfortunately been forced to close, remaining as a vast ghostly edifice by the Chari river. The eponymous Chad Lake region remains inaccessible to tourists because of Boka Harem activity.

We had planned to visit the Ennedi plateau which is part of the Sahel region extending to Sudan. We aimed to cram as  much as possible in the shortest possible time and had bullied our expedition organiser A. into complying.

In Chad there is a single tarmac road which crosses in a roughly east West direction and connects N’Djamena with Abeche, the gateway to the Ennedi region. This road roughly bifurcates the country into two. Normally this journey is done in two days, with a camping stop made in the region around Mongo about five to six hours away, making for a more leisurely journey, but we decided to cover the whole distance to Abeche in one day. Flights run between N’Djamena and Abeche, but they are a little bit uncertain and Air Tchad unexpectedly cancelled all flights, leaving a road trip as the only option.

The road from N’Djamena to Mongo passes by Chad’s oil refinery at some distance from the capital. As stated earlier Chad is an oil producing country, which sadly is not reflected in the state of its roads or the livelihood of the people. Mongo is situated at an important cross-road, with the road south leading to the celebrated Zakouma national park, one of the best places to view wildlife in Africa. The park was once party to large scale poaching, with diminution of elephant population and other wildlife. About 5 years ago Africa Parks took over the management of the Park and since then poaching of elephants has come down to zero and the wildlife is thriving again.

From Mongo to Mangalme and beyond the road passes through some lovely stretches of hilly and wooded country. This is the middle country, occupied mainly by the Hadjarai people. Our road-trip provided us with glimpses of Chadean lives. As railway tracks are not yet developed and flights are infrequent and relatively costly, most Chadeans have to avail road transport for traveling. For long distance travel, people cram into every available space atop a vehicle in a remarkable feat of balance, just as they do in some parts of the sub-continent. Short distance travel is still done by donkeys, horses, camels and horse and donkey carts. Donkeys are an important part of rural Chadean lives.

The ladies of the household are really really hard-working. Basically they do everything from farming their plots of land, maintaining the houses( even thatching), cooking, cleaning, looking after the children and bringing wood for fire and water. As I said earlier, even though Chad is an oil producing country, the benefits of it seem not to have reached the ordinary villager, who has to still rely on firewood for cooking. As this area of Chad is semi_ arid, this process is greatly denuding the area of trees and shrubs and poses an environmental hazard with rapidly increasing desertification. Water is also dear and has to be brought from ponds often situated at a considerable distance. It is often the task of the children to fetch water and we often see them passing us riding donkeys carrying jerrycans. Another important job for the children is to look after the herds of cattle and taking them out to pasture, although the men also do this job. Overall, it seems that the men have a relatively easier time and seem to have lots of time to relax and gossip and pray communally, but I maybe doing them an injustice and being a tad harsh in my observations. Of course it is the duty of men mainly to earn a living.

Anyway after a gruelling twelve to thirteen hours journey we finally reached our guesthouse in Abeche. Abeche was the old capital of Chad before the French conquest. This was at one of the richest areas in Chad because of the Trans-Saharan kafilas and the pilgrimage route to Mecca. Then the French happened, followed by two major epidemics in 1913 and 1917; plots against the French, counter-plots and beheadings. At one time the city population had attrited to just 6,000. Today Abeche is a ghost of its former glory, but is still an important city with a large and important market.

The next day we pushed on from Abeche to Kalait, the last big town before crossing into the Ennedi plateau proper, where it was time to stock up on water, oil and other supplies.

The Ennedi massif is a sandstone bulwark in the Sahel region which was shaped by wind erosion. Over millions of years wind shaped the rocks into majestic, eerie and spell-binding forms. Superlatives trip easily from our tongues as we beheld the great shapes. We are mesmerized, trying to etch the shapes into our minds and save it on our cameras.

Our first stop of importance was the Bachikele canyon. Here there is a permanent source of water, coming from deep underground and is cool and refreshing to the touch. The small stream is an important source of water to the surrounding Toubou herdsmen, who bring their jerrycans and their animals to the water. The northern part of Chad is inhabited mainly by the semi-nomadic Toubou tribes and some Tuaregs. The Toubou really really know the desert. They can read the desert like the back of their hands and can  make out where there is water, which is a likely place for pasture of their camels and donkeys. Our driver Abdullah and our guide were both Toubou whereas the other driver had come from southern part of Chad. It was incredible to see Abdullah in action. He was a genius. He could read the sand and determine which sanddune was fit to be driven over and where one would get stuck, and that too while driving the car at speed. The other driver struggled, not having Abdullah’s experience and expertise and had to be rescued on occasion.

At Bachikele we met a group of herdsmen and their animals fetching water. The ladies and children are extremely camera-shy and regards us with curiosity. One girl had a lovely smile which lit up her face, but we could not get her to pose. The red canyon walls extend for a kilometre or so with the stream crisscrossing on one side. From outside the opening it looks quite ordinary, but it is breathtakingly beautiful once we enter the canyon.

Another spectacularly beautiful place is Aloba, where there is a natural arch formed, the second tallest in the world. The country beyond looks like something out of a ‘Lost World’. We could almost imagine H.Rider Haggard’s characters to emerge. This could be She’s place or lead to King Solomon’s mines, and we almost expected She to emerge from behind one of the rock pillars. Well, why not? 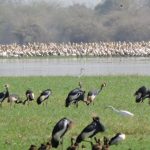